My eyes keep going down to that six-year gap. What pulled me offline, what’s put me back on?

There were kids, growing, and the complicated demands on free time that leave little for coding, or composing, or… thought, even, as damning as that looks in writing. There was a high-stakes failure in our endeavors that sent my wife and I back to the drawing board for a while. There was a poverty in my thinking when I could do it: nothing to say to anyone and no inclination to say it.

The gap itself is the surface of a lake. No idea what’s under there, when you look at it. The light just bounces off. No divers, surfacing occasionally to report. It’s been like that, undisturbed, for oh ages, and the accumulated silence and stillness gives the whole scene a sinister overtone. That’s not how an open, communicating life should be.

I don’t know that I have more, or better, things to say now. But I do recognize in myself the long, sinister inertia, and because of and beyond that, the danger of a permanent loss of capacity, and it needs correction. I think writing — even into the void, maybe, and about nothing — could be a tonic for that malady.

I’m also keenly aware now that somehow I tended to the infrastructure even in my absence, so that if and when there is something that needs saying, it can be said. It’s my hope that these etudes will make me ready to do that, when the time comes.

I’m sure I’m the last person to realize that the spate of high profile suicides at Foxconn in China are connected with the factory that makes component electronics for Apple. But it’s true, and incontrovertible, and what am I going to do about it?

To some extent, it’s impossible not to be implicated in economic injustice. My new shoes, for instance, are made in China, and I doubt the workers who assembled them are making anything like what I would consider a living wage. Foxconn was paying its workers a maximum of $150 a month; in the wake of international scrutiny, they’ve increased that to (after a trial period, a possible maximum of) $300. Their workers eat and sleep on campus in massive dorms with multiple roommates, are submitted to demoralizing drills, and regularly work far more than the government regulated maximum of 38 hours monthly overtime, putting in upwards of 12 hour days for weeks when there’s a big order (say, the iPhone 4?).

I know that Aldi, where I buy most of my groceries, is a private company, and thus exempted from revealing details of their balance sheet; and that the price advantage they enjoy cannot come entirely from their utilitarian approach to product placement. It’s likely that they, too, commit economic injustice. I’m sure I don’t need to speak about my complicity with Big Oil like BP— I live in Detroit, where to live is to drive. And as far as complicity with injustice is concerned, I remain in America, which is currently suspending habeas corpus, prosecuting two meaningless wars and advocating for the summary execution of at least one of its own citizens without due process.

But there’s a difference between these, which have to do with circumstance of place and time (I live in the post-agricultural America, and cannot entirely avoid the evils of Empire and Oil), or with economic necessities like food and clothing, and the luxury purchase of an iPhone, a status symbol with little intrinsic value (locked into a commercially inferior voice network, no less), made by a boutique company knowingly contracting with a Chinese factory that commits economic injustices that drive its workers to suicide.

I would pre-emptively argue, against those who would point out that I will hypocritically continue to use my MacBook and multiple other electronic devices equally tied to unjust labor practices, that the only escape from being a hypocrite is to give in to evil. Just because an action is not comprehensive does not mean that it is wrong, or useless.

Is there any reason I shouldn’t let my contract expire and quit this farce?

In conversation with a colleague, I mentioned that I was a bad Social Networking Librarian, because I do not maintain a Facebook profile. I am not privy to Farmville, Mafia Wars, etc. I cannot become a fan of your cause or respond to your informal poll. And recently, I find that roughly 15% of the weblinks I follow dead-end at content locked behind the Facebook wall.

It’s hard to remember that just because you’re invested in a social/communication network doesn’t mean that everyone is. This is obviously true for Facebook, but includes any communication scheme, including email. Further, just because someone maintains a node on a network (an email address, say, or a Facebook account) doesn’t mean that if you hit that node you’ve effectively communicated with that person. He or she may check his email account infrequently, if at all. And this lead us to consider what I think is the fundamental — and fundamentally difficult — thing to remember about people online, which is: your online presence is not you.

And since we’re librarians, we instantly leaped to this analogy: you are a book and your web presence is merely a bibliographic record. It’s a stand-in for the real you. Just because you’ve accessed the bibliographic record, don’t think you’ve read the book. You may be cutting large swaths of your intended community out of your communication network simply because you’ve conflated their selves with their representations of themselves. An email (or a Tweet, or a Status update) does not communicate until someone reads it, and only a subsection of the people you’d like to reach will — or can.

It’s hard to believe this is true in 2010, or that it applies to any but the aged or the very very young, but it is and it does. If you post it on Facebook, you will not reach me.

allow me to timestamp one LOST theory in advance of the premiere of the last season: the series has been employing up to three alternative timelines already, and we’re about to see a (possible) fourth. miles’s father is “pierre chang” in one of these timelines. in another, he is “marvin candle.” the island is a shared point on all 4 timelines, and has the unique quality of being able to move among them.

I’m so happy this exists I can’t even tell you. A detailed index of 1980’s saxaphone solos, with commentary.

zena reminded me about this truth yesterday (reminded us both, actually. why do we constantly need reminding? if you’re not actively moving forward, you’re moving backward.) jennifer daniel (of http://http colon forwardslash forwardslash www dot jenniferdaniel dot com.com) just brought it up again.

if you hear it twice, someone’s trying to tell you something.

hot on the heels of the blog of “unnecessary” quotation marks comes apostrophe abuse. it can only get pickier from here, folks. 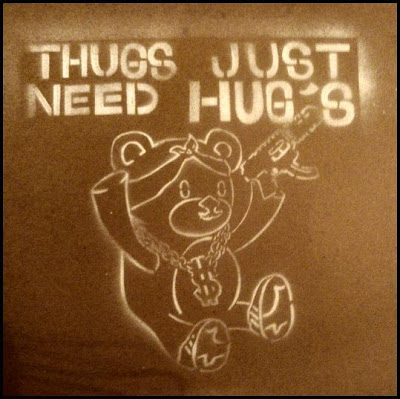